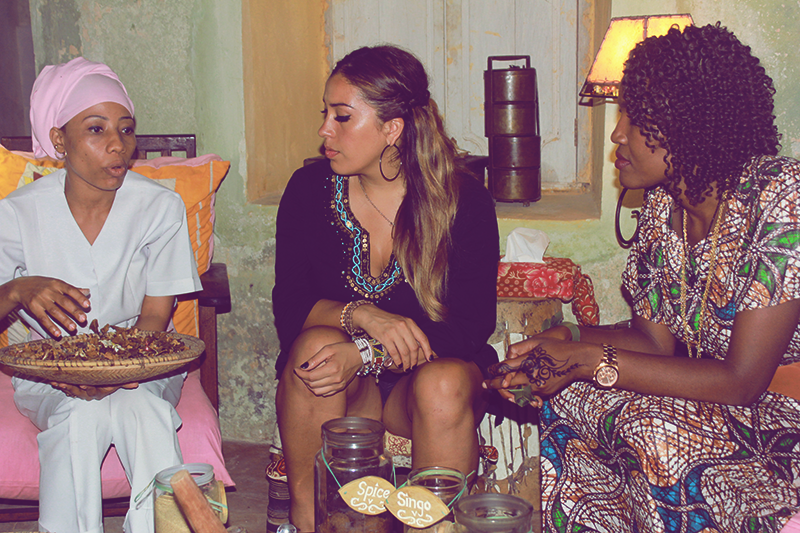 When it comes to beauty secrets, there are NO BOYS ALLOWED.  Zanzibari women are dedicated to their husbands and take pride in pleasing them through their housework and even during personal time.  So much so that a week before the wedding, women will take the bride-to-be and teach her everything they know: from household chores to keeping their man happy in the bedroom-they spend seven days straight dissecting married life.  “No questions are left unanswered,” said Tatu from Mrembo Spa when we all burst into laughter after learning about these naughty rituals and traditions.

Udi- The word “udi” in the Swahili language means the incense of the wood of aloe.  To create the incense, small pieces of aloe wood are mixed with rose water and perfume in a glass jar.  Udi is used as a perfume for the house and also an aphrodisiac.  Women use the udi by placing it underneath their khanga (long, African dress garment) for two minutes.  While it’s under their dress, they squat over the burning smoke in such a way that the smoke will penetrate the inside of their female genitals.  The scent will arouse their partner, acting as an aphrodisiac.  Udi is a secret recipe among Zanzibari women and is passed on to young women before marriage.

Clove Scrub – Women in Zanzibar use the “vidonge” clove scrub recipe because it increases a man’s libido and stamina while leaving the skin energized and fresh.  It’s mostly used for body massages when mixed with coconut oil but it can also be great for foreplay when used on the lower parts of your partner-whether male or female.  One quick cautionary note: DO NOT APPLY TO THE BALLS.