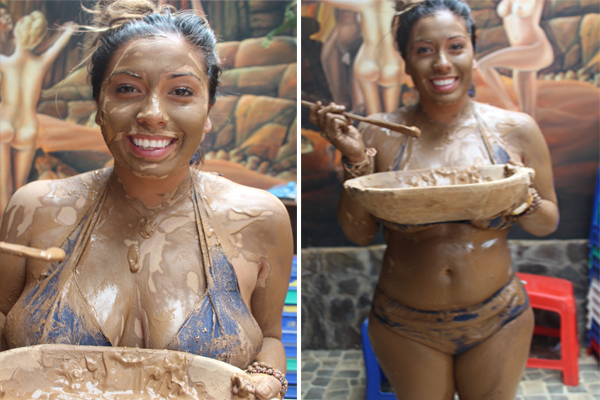 I called weeks in advance to book an appointment at the El Refugio Spa, which offers their well-known, “bano de barro,” a.k.a mud bath. The 40-minute beauty treatment works by applying medicinal clay from the Amazon in a circular motion all over the body. Mud has been used for years to improve the appearance and texture of the skin and to prevent dryness.  It works as a natural exfoliate, is extremely nourishing, and is chemical free. Did I mention mud also fights against stretch marks, fine lines, and wrinkles? I thought you’d like that one.

The clay forms when volcanic ash is mixed with water. It contains a combination of minerals that includes, sodium, magnesium, and potassium. Mud has been used for thousands of years in civilizations throughout Central and South America, where there were active volcanoes nearby.

I for one, couldn’t wait to cover my body from head to toe in mud. But I have to admit, the most awkward part was the drying process, which comprised of me dancing to Zumba videos in front of my attendant. I’m not a shy woman, but a half-naked mud dace was a little out of my comfort zone. I did enjoy a good laugh when the attendant started laughing and dancing along with me.

Banos is home to the largest and most active volcano in Ecuador, called the Tungurahua. It’s also known as “The Black Giant.” Banos is translated to“Baths” and gets its name from the hydrothermal springs in the city. Banos is a vacation spot for both Ecuadorians and foreign tourists.  One of their other main attractions is their hot springs, which costs less than $2.00 for admission. The water originates from the volcano itself and has different sized and temperature pools that range from freezing cold to extremely hot. The springs contain mineral-rich water which helps to relieve symptoms of many poor health conditions and also works as an anti-inflammatory. For thousands of years, people have trusted in and used the healing powers of the natural hot springs and the volcanic mud baths. They were the first original spa treatments in many parts around the world.