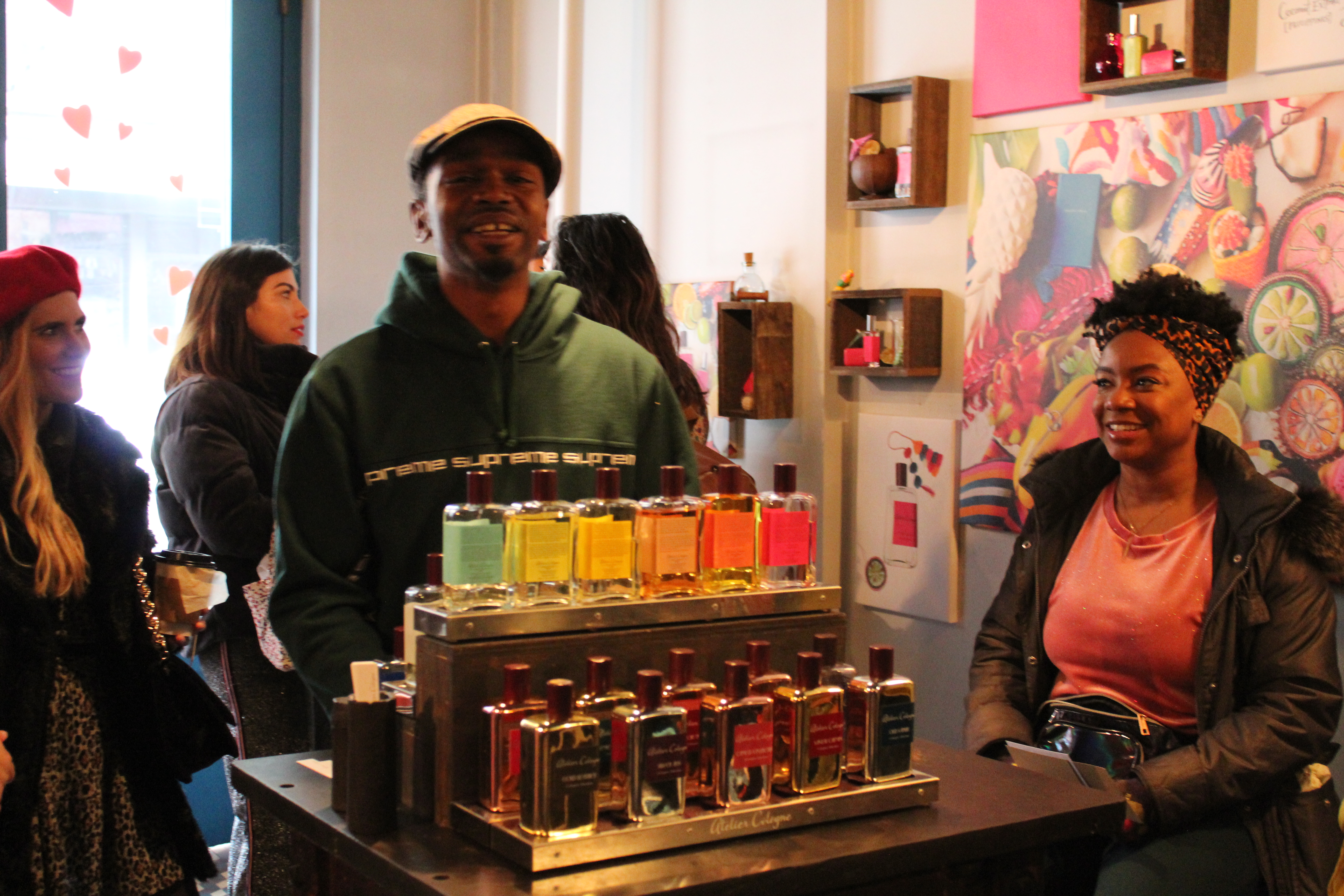 Have no fear, though, because we have some amazing insider tips from Emitsu Geez, fragrance guru of Youtube channel Simplyputscents. On our NYC Beauty Walking Tour, we love stopping at Atelier Cologne not only for the decadent scents, but for Emitsu’s infectious enthusiasm for and knowledge of fragrance. As much of an expert as he is now, Emitsu wasn’t always an aficionado:

“I started as a casual shopper,” he recalls. “I always had fragrances purchased for me by the women in my life, by aunts, my mother, girlfriends, and for Christmas. I was a regular dude who received fragrance as gifts.

“Then, at some point I went online to do some research because I noticed fragrances were changing. I ended up watching a YouTube video, and it inspired my new interest in fragrance. I didn’t realize there were so many intricacies to fragrance and so much to it. It blew my mind and I wanted to know more. That was about four years ago. It blew up from there. It became almost an obsession.

“I started doing YouTube videos and that took me down the rabbit hole. A lot of people I meet think that I’ve been working in fragrance for years, but that’s not the case – it’s all research and just constantly learning. After you purchase and smell so many scents and research so many things, your knowledge base expands.”

Emitsu definitely has an incredible knowledge base for perfume, and was kind enough to share some of his wisdom with us, and gave his insight and tips for common fragrance buying scenarios. Read on for some of Emitsu’s amazing fragrance buying wisdom! 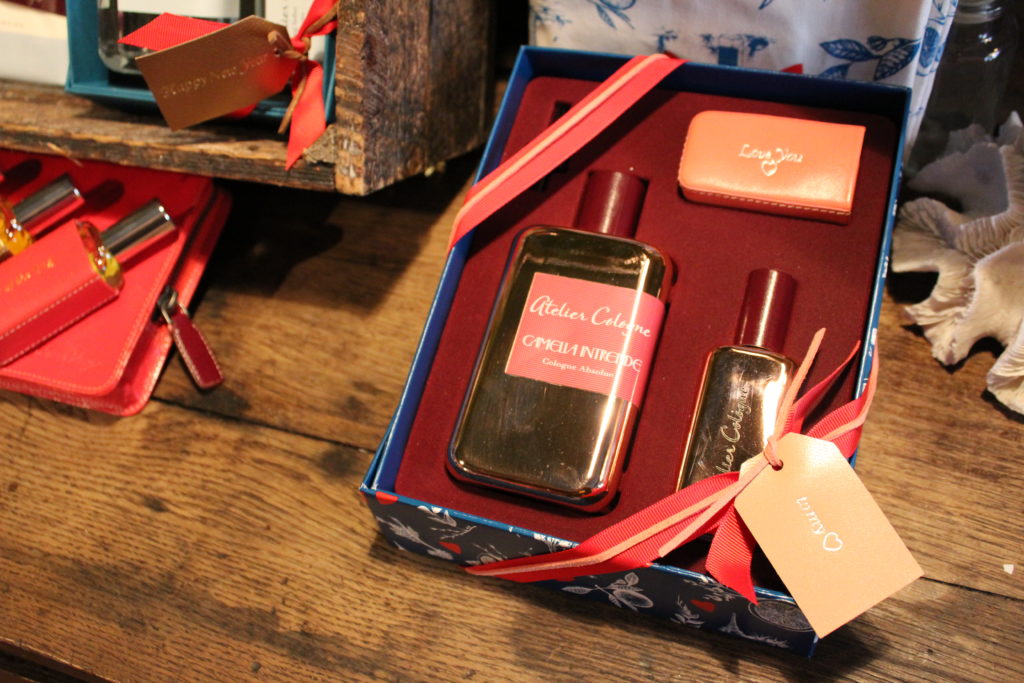 At Atelier Cologne, you can get a travel size of any fragrance in a personalized leather case!

Buying fragrance for a friend:

Let’s start out with buying scent for a friend. Chances are you already know what they like and dislike, and what fragrance they already own, which is a great place to start.

“If you really know your friend and know what their taste level is, it’s easier,” Emitsu says. “Pay attention to what they typically like to wear, but beyond that, go with something as close to a feeling as possible.”

Think of what feelings you associate with that friend, and try to find a fragrance to match. Are they adventurous and bold, or more subdued and reserved? Find a fragrance to suit that identity and the emotions you attach to that friend. Also try and think of special places or memories you can draw upon when looking for fragrance for a friend. For example, maybe you just went on a beach weekend, and can find a tropical fragrance to bring back memories. Whatever it is, really think about your friend – their preferences and your feelings and memories associated with them – and it will make your fragrance hunting a lot easier than trying to decipher individual fragrance notes.

“If you’re getting a gift for a friend, a really slick way to go to is gather a bunch of samples of fragrances you’re considering for them, and present them to that friend as if they’re your own samples that you’re thinking of buying for yourself,” he says. “See how they react under the guise of these scents being for you. Focus on their reaction and how they look. Fragrance is one of those things that it’s hard to disguise your feeling about it in terms of your facial expressions. When something smells good, your face shows it. When something smells bad, your face shows it. So watch their reaction!”

Buying fragrance for a significant other:

Whether it’s your anniversary, a holiday, or your significant other’s birthday, fragrance is a wonderful and personal gift.

While Emitsu still recommends trying the covert sample trick from the example above, he has an additional tip when buying scent for a significant other: pay attention. That is, begin paying attention to how they smell, and what sort of smells they like. Chances are you haven’t really thought about it much before, because so much of familiar smells are subconscious. But when you start really paying attention and making notes about what smells your significant other likes or dislikes, it’s makes it much easier to pick out a scent that they’ll really enjoy.

“Let’s say you have access to their space, like their apartment,” he says, “What does their home smell like? What kind of scents do they gravitate towards? If they already have a few fragrances, look at their collection and get a certain idea of their sense of scents. What kind of fragrances do they have already? If they don’t really wear fragrance, what other smells can you identify that they like? When you’re out in public try and pay attention to what things they like or dislike.”

Another thing Emitsu recommends is to use your own sense of smell when trying to figure out what fragrance to buy for a significant other.

“Smell them!” he suggests, “Try and smell them and their space, and try and categorize what you’re smelling. Are you smelling something piney and musty, or citrusy and floral? Once you figure out what it is you’re smelling, you can pick out something that’ll work for them.” 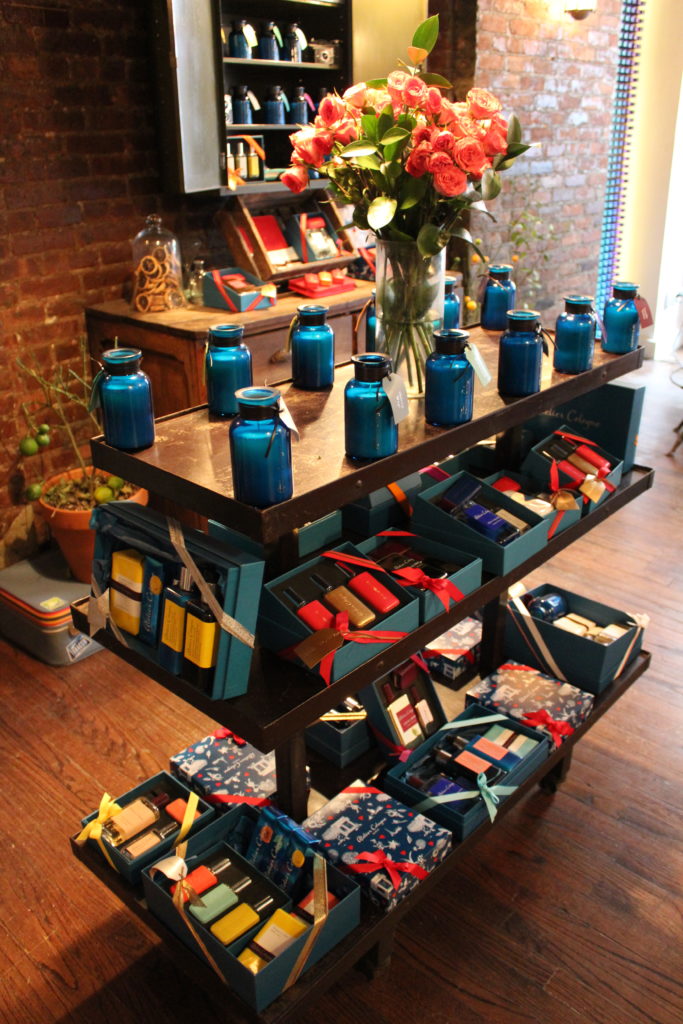 Buying fragrance for someone you don’t know too well:

While rare, there are occasions when you might need to buy fragrance as a gift for someone you don’t really know at all. For these scenarios, Emitsu recommends what the fragrance industry calls a “dumb reach.” In industry lingo, a dumb reach doesn’t mean a stupid or bad decision, but rather a fragrance that is so universally appealing and so versatile, that it’s one of those things that people will just automatically reach for without a second thought.

“It’s a fragrance you don’t have to consider what season it is or what you’re wearing,” Emitsu says. “If you’re making a blind guess, go with something versatile, easy to wear. Steer away from leathers and patchoulis or acquired taste levels. Stick to fruity, fresh, aquatic – it’s really rare that people hate those, generally speaking.” So, look for universally appealing, quality fragrances that don’t feature acquired-taste scent profiles. Out of Atelier Cologne’s collection, he recommends Clementine California and Musk Imperial as two great choices for a universally appealing citrus or musk fragrance, respectively.

Buying fragrance for yourself:

Buying fragrance for yourself might be the toughest assignment of all, which Emitsu definitely understands.

“It’s daunting for people to decide what to smell like,” he acknowledges. “So they end up going with what’s popular. They don’t trust their nose, and they go with what everybody says they should smell like. It’s understandable, though. You have all these options, and your nose gets tired, after a while everything starts smelling the same, and you get confused. I get it – picking out a new fragrance is not a user friendly task.”

His first tip is to trust your preferences and your sense of smell, and to try and learn more about fragrance to increase your confidence.

“Think about what you like, and what is to your taste. It can be scary to take a risk and trust your own taste, and a lot of people do need to be told ‘this is for you, that’s for you.’ But the more you’re educated and confident, you can take risks and trust your nose.”

Along with advocating that consumers be confident in their decisions, he also urges people not let marketing barriers dissuade them from trying something new. Specifically, he strongly feels the idea of gender-specific fragrances needs to evolve.

“In the fragrance world, in terms of fragrance itself, there’s no such thing as gender really. That’s a marketing thing: ‘You’re a man, so you’re supposed to smell like this, you’re a woman, so you should smell like that.’ It’s easier to market by gendering things because marketing companies find it easier to market to groups. And they know they can charge women more for fragrance. There are designer brands where they have a men’s and women’s scent that is identical, but they are marketed as different, and the women’s is more expensive. It’s a pink tax.”

To get away from tired, sexist constraints, he suggests looking to the niche and boutique fragrance markets for a wider array and more egalitarian choices. At Atelier Cologne, for example, all the fragrances are unisex by design, and intended to be shared between spouses and significant others, roommates and friends, whoever!

“Generally speaking in the niche world, we don’t make those gender-specific choices for you,” he says. “The niche world is starting to make designer companies change things, to stop telling people what they should be wearing, and to get rid of these outdated ideas of who should smell like what. It’s crazy, you wouldn’t let a waiter tell you what you should eat when you walk into a restaurant based on who you are  – ‘You’re a man, so you’re going to eat steak and brandy. You’re a woman, so you’re going to have Pinot and a salad’ — so don’t let a fragrance company tell you what to wear. More guys are wearing fruit forward, citrusy, really light scents, and more women are wearing the deeper, leather and musk and piney scents — wear what you like and be confident about it.”

In addition to feeling empowered to explore whatever scents you want regardless of how they’re marketed, Emitsu also advises people to approach buying fragrance like they approach buying clothes, with an idea of why you’re buying this item and what are you going to use it for.

“If you look at your fragrance like you look at your clothing it gets a lot less stressful,” he says. “You have this piece of clothing for the summer, and you have this one for the winter. You have this thing you only wear for special occasions, and then this thing that’s comfortable, for every day. Think about what you want this fragrance to do, how you want it to make you feel, and why you’re buying it. Then you feel more empowered to make a clear decision and not walk away with something you dislike and won’t use.” 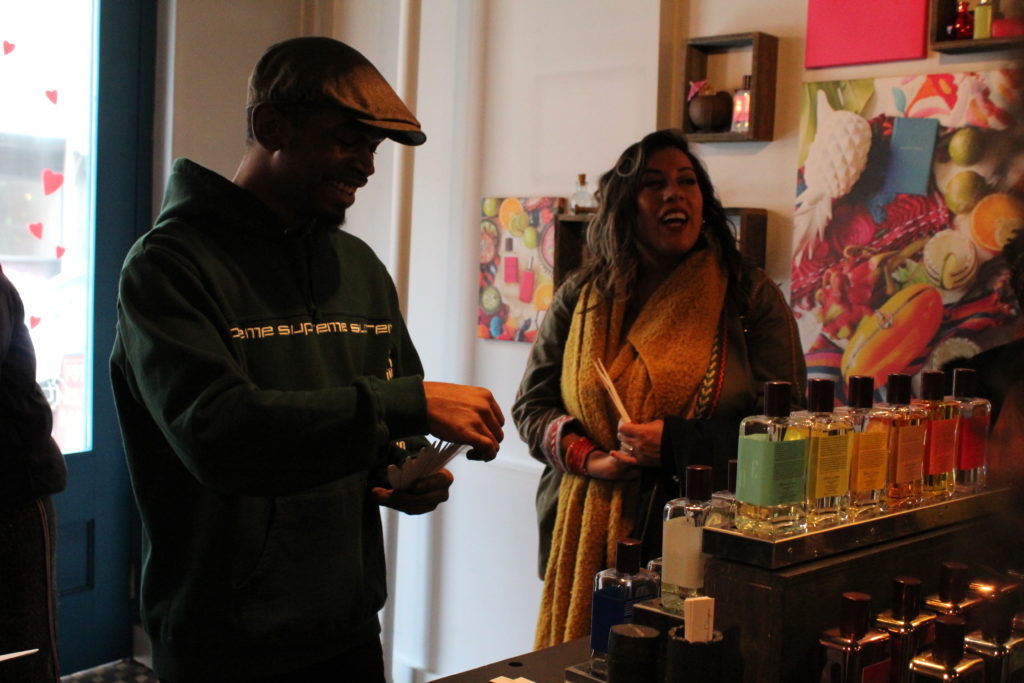 Emitsu joking around with our NYC Walking Tour group while educating us about Atelier Cologne’s fragrances!

We hope you’ve learned a few tips and tricks about fragrance buying, and feel better equipped to make smarter fragrance purchasing decisions. Be sure to check out Emitsu’s YouTube channel Simplyputscents, follow him on Instagram @simplyputscents, or pop by Atelier Cologne in New York’s Nolita district to see if he’s in!

Special thanks to Emitsu Geez for sharing his fragrance wisdom with us!

Scent Journey with The Body Shop

You're a wisdom seeker, I can tell! I can tell bec

How can we move from ignorance into intentionality

As a beauty entrepreneur, executive, journalist an

Whether you’re a seasoned local or a wide-eyed t