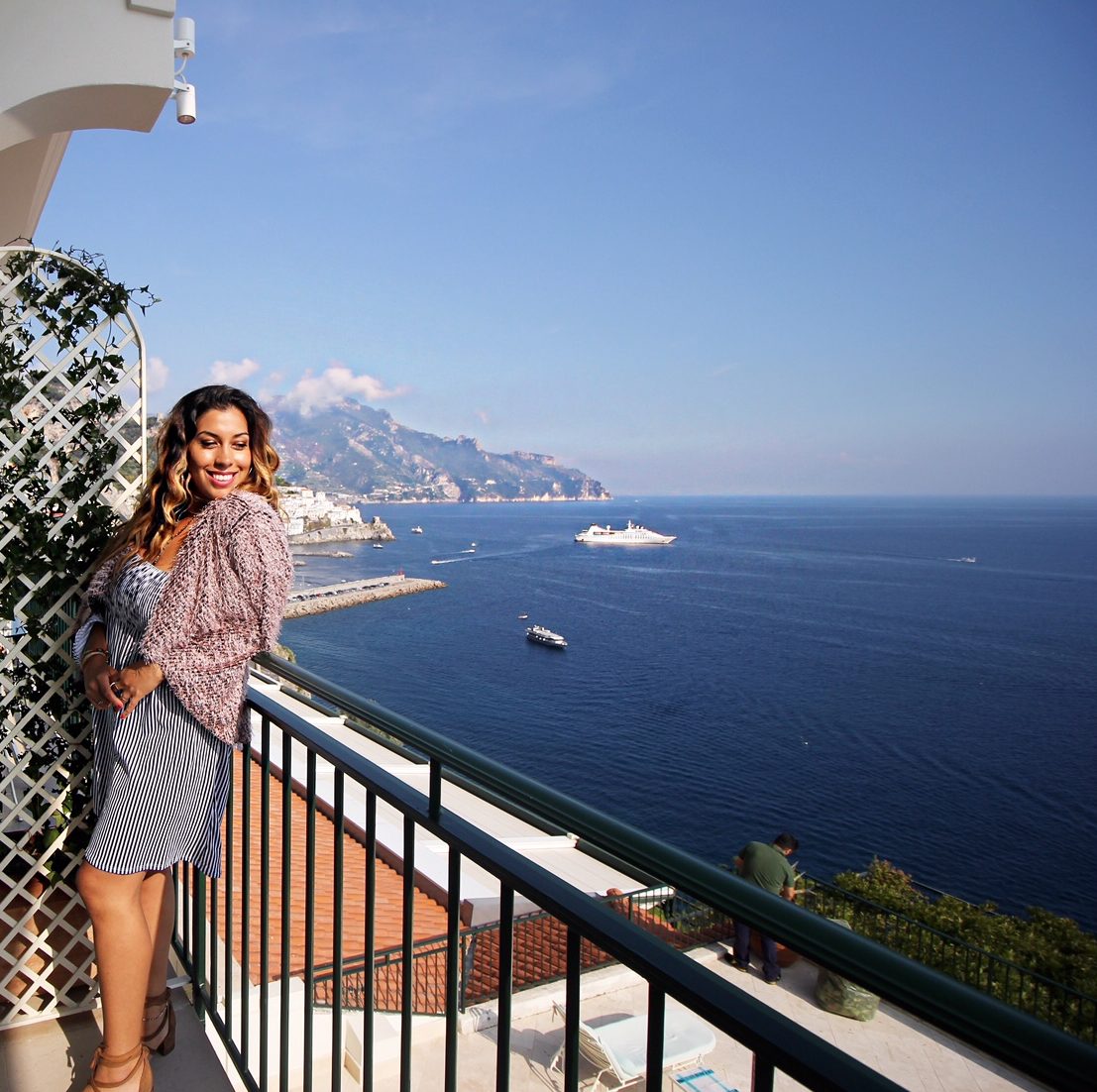 Italy’s Amalfi Coast is one of the most picturesque places I’ve ever seen on earth, with the bluest crystal waters lined with small towns precariously perched between mountains & the sea. No surprise it’s a UNESCO-listed landscape!

When planning this beautiful adventure to Italy I had no idea we would be traveling south to the coast of Italy to a city built on mountains full of color, gastronomy at its best, and a true #lovers destination for newlyweds or couples celebrating their 40 year anniversaries and the countless mother and daughter couples we saw. Whatever the reason for traveling to Amalfi was their were magical memories being created and truly living the Italian Dolce Vita.

Its hard to explain what this place looks like, but it left me speechless from the moment of riding along the coast praying for our lives which, to be honest, is part of the adventure. Promise it gets easier the 2nd time around. Swerving side to side on the local SITA bus that does hourly drives from nearby towns like Sorrento, Naples, and other coast villages. People from all over the world travel to Amalfi wanting to get a taste of this Mediterranean landscape, known for the rich and famous. You can also get a glimpse of the villa of Sophia Loren along the Amalfi Coast

Colourful umbrellas, seaside restaurants, here’s a little #BeautyExploring we did on our recent trip to Italy’s Amalfi Coast. It has officially become my favorite destination in the world.

A lemon town….
The Lemon is the fruit of the Amalfi Coast.
Lemon is an inevitable ingredient that is part of the Mediterranean cuisine. But this isn’t a regular lemon its called the Sfusato Amalfitano lemons and it’s one of the most valuable
lemons in the word. It has higher vitamin C content than most other lemons. Playing a key role as an antioxidant and can help the body avoid cell damage from “free radicals”. I’ve never seen lemons this size, color, and taste!

A fun way to try this #BeautyIngredient is to book a Lemon Massage called “Amalfi Gold” ( 50 Min. 140 Euro) Exclusive Treatment at Hotel Santa Caterina. They Place lemon slices along the Chakras and then a relaxing massage is followed with a special lemon oil that leaves the skin with a beautiful glow.

In town and panoramic most of the cities on the coast, you’ll see stores selling all kind of lemon goodies, from Christmas ornaments to lemon shaped soaps. The lemon is their trademark!

Hotel Santa Caterina
After traveling all throughout Italy I needed some me time, and from the moment I arrived Hotel Santa Caterina catered to every need I could have asked and dreamed Italian. This 10th century Villa is immersed in the beautiful scenery of the Amalfi Coast.

Check out my view from the balcony below! I could now understand why princess and queens have made the Amalfi Coast their home, but also why Hotel Santa Caterina was a 5-star hotel – luxury, beauty, and pure relaxation with its incredible hospitality and services.

I think any traveler who has made Italy home can relate to the amount of walking, bus hopping, through every city and how nice it’s finally to settle into a hotel for a few days. Especially one that makes you completely feel at home, and gives you such attention. A great way to decompress and admire the beautiful pastel skies over the Amalfi Coast or a swim in their private beach overlooking the Tyrrhenian Sea. With every corner a selfie dream with lighting that brings out the beauty in just about anyone.

How to get there?
Sita Bus from Sorrento – 8 Euros one way.
Ask the driver to stop at the hotel, or take the Sita Bus directly into Amalfi town centre and the hotel has a private shuttle. Just look for a man in an orange/yellow jacket closer to the pier.

I highly recommend a 1-2 night stay to see why so many people love this place, and it just adds such beauty and relaxation to any journey to Italy. It truly made my mother and daughter trip.

We boarded Capitana Ago Charter who organizes small group tours, and private charters to Capri and the Amalfi Coast.

I had always heard about the beauty of Capri and knew a one-day excursion was all we needed because it’s a very expensive island. Beloved by the international jet set and Hollywood celebrities like Jackie O, Audrey Hepburn, Katy Perry, and much more we boarded to see this island up close and personal.

Our boat skipper showed us the famous Gucci and Dolce and Gabbana homes, and sailed us around telling us of Roman Myths, and cruising along all of Capris Grottis ( White, Green, and Blue) Of course I mentioned if there were any beauty stops he could direct us to and he sailed the boat to the famous location where the Dolce and Gabbana commercial + AD was shot at the love rock. Rumor has it if you kiss your loved one as you go into the middle of the stone your love will be eternal.

Book a seat on their boat: Lunch is included and endless memories along the coast. Hotel pick up also a plus. https://www.capitanoago.com/

We also had heard about a Capri Fragrance line that was made on the island and we wanted to learn more. Once our boat from Capitano Ago landed in Capri we went straight to Carthusia Profumi di Capri. Legend says that in 1380, Queen Joanna I of Anjou was arriving in Capri so the father of the Carthusian Monastery of St. Giacomo created a bouquet of the most beautiful flowers on the island. After three days he noticed that their water had acquired a fragrance. He went for answers to the father alchemist who traced the origin of the scent to the wild carnation of Capri, the “Garofilium Silvestre Caprese”. This water became knowns as the first perfume of Capri. The tradition now continues where Carthusian monks still work in the production and the fragrance is filtered and distilled to perfection and wrapped by hand. I bought a mini-size of (3) Perfumes at $18 Euros. Not bad for a little set as a memory of the magical island.

Learning to feed the soul with Carmen
Just two hours away via the Sita Bus and less than 8 Euros you can enjoy a panoramic view of the coast with an incredible foodie destination at the end of the road.

This trip would not have been complete without a visit to cook with Carmen. I will admit being in Italy is a little intense with the number of restaurants on the streets and your really not sure if you’re ever having that Italian meal experience we all crave when traveling abroad. You either feel like you over-paid or if you’re missing out. I mean being from NYC I’m a little spoiled with great Italian restaurants and I was looking for something even better… Well, I did find it and it had a lot more heat I could’ve imagined. A real kick-ass Italian women not afraid to yell BRAVO, and show you the real cuisine of Italian cooking. Unlimited wine, which again is always a plus but her way of being just radiated and made you feel at home as if you were cooking with your friends. By the end of the night, we were all laughing, and sharing in one of the best 3-course meal plus a delicious homemade tiramisu that I’m still thinking about today. From making your own pasta to rolling eggplant ( BTW did you know Eggplant isn’t breaded “America” ) cutting fish, and a DIY Desert bar… Plus I’ll add it was also a great Italian class as Carmen would yell words in Italian – making us repeat in laughter and now forever in our minds. Bravissimo…

Book a Reservation with Carmen:

Our final leg of a two-week adventure in Italy wouldn’t have been the same without seeing the beauty of Amalfi. It made Italy come alive connecting every cities magic with a final ah moment. It’s a place I know I’ll be back to visit and continue to explore as it inspired me beyond words. Sophia Loren was a staple of the beauty culture of the coast and you would find her pictures and quotes in restaurants igniting the beautiful life, and charm she vowed to her audience. It was great being able to #BeautyExplore this coast. The Ode to Lemon in the Hotel Santa Caterina Picnic Area Royality Time with the Beauty of the Coast An incredible day with Capitano Ago along the Coast and Capri The most beautiful city in the world, Venice

We’re all about destination-inspired beauty prod

What is Beauty? Prints, Patterns, Textures, and Sp

Who else is pulling out their “Bano De Flor” B

The Beauty Way Summit 2021 The path of the Heart